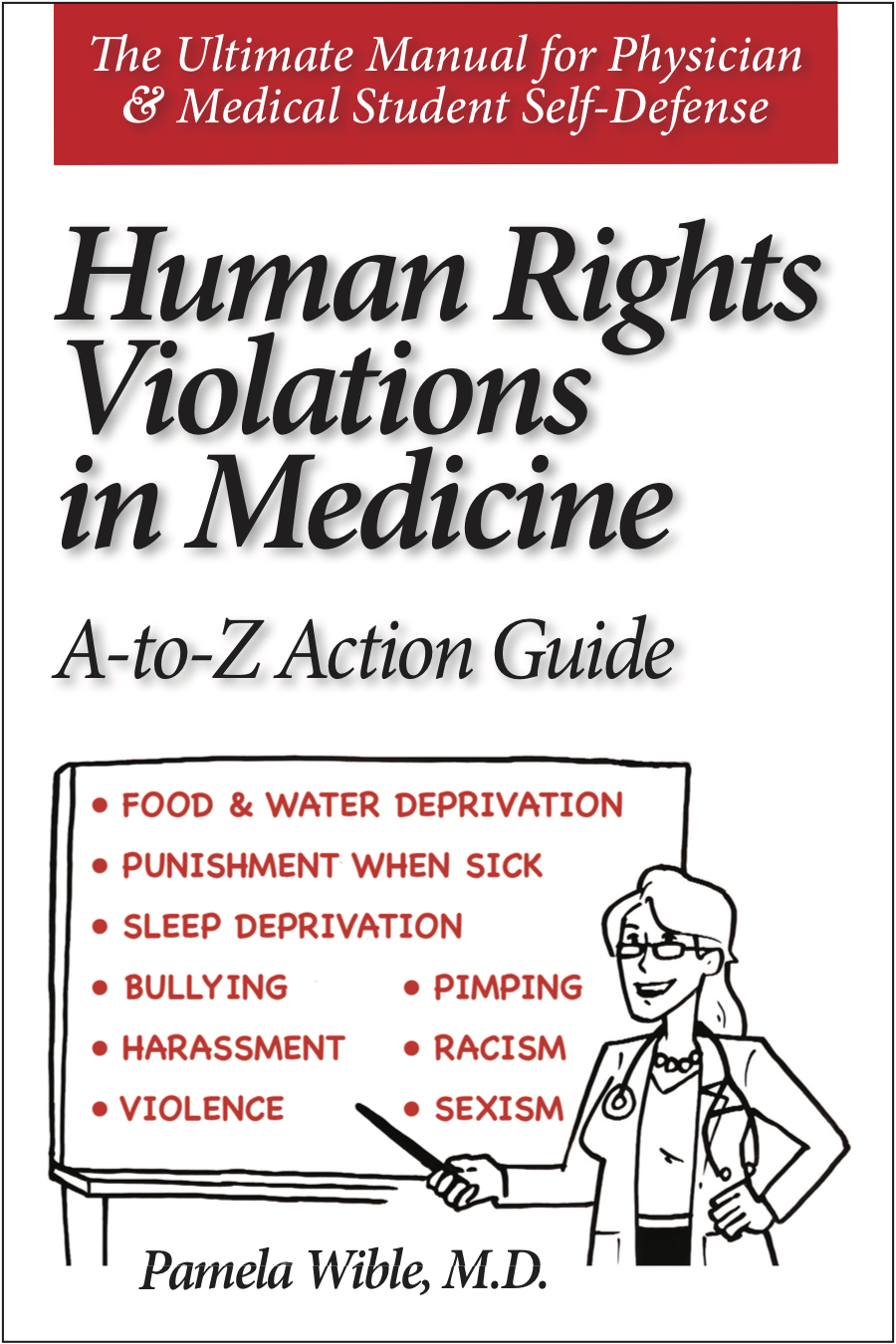 Excerpt from Human Rights Violations in Medicine released June 19, 2019.  Dedicated to my brothers & sisters in medicine who have lost their lives in pursuit of healing others.

From sex trafficking to censorship, the range of human rights violations is immense, some more heinous than others. Abuse may be perpetrated by dictators in war-torn countries and administrators in first-world hospitals. Inside this action guide are the top 40 human rights violations present in our most prestigious medical institutions. In isolation, many seem minor. In totality, these violations lead to thousands of American medical student, physician, and patient deaths—each year.

Suicide is an occupational hazard for physicians and medical students. Yet students enter medical school with their mental health on par with or better than their peers. So why do so many medical trainees kill themselves before graduation?

Walking into medical school is like entering a war zone. A medical student in the Army Reserve told me she was less stressed in Afghanistan during active sniper fire than in medical school! Here’s why: She had total trust in her military comrades. She knew if killed by enemy fire, she would be brought home, covered in an American flag, and honored with a proper burial. They had her back. In medical school, she never knew who would stab her in the back.

I had to find out why my friends were dying.

In 2012, I began running a suicide helpline for doctors. Since then I’ve spoken to thousands of suicidal physicians (and families that have lost doctors to suicide). I’ve now compiled a registry with nearly 1,300 doctor suicides that I’ve personally investigated.

I know why doctors die by suicide. I know highest-risk specialties. I know what leads doctors and medical students to make the decision to kill themselves during medical training and beyond. Now I feel compelled to share what I’ve discovered with you.

Our doctors are suffering from human rights violations in medicine.

Human rights are universal moral principles that apply to the treatment of all human beings no matter sex, ethnicity, religion, culture, or profession. These basic freedoms are standards of human behavior protected by law from birth until death.

As physicians, our professional code of conduct further dictates that we uphold the rights of the most vulnerable. Despite being held to the highest standards of behavior when safeguarding the rights of patients, physicians and medical students experience human rights violations endangering their own lives.

Physicians-in-training are now legally forced to work 28-hour shifts and 80-hour work weeks. They suffer extreme sleep deprivation at levels incompatible with life leading to hallucinations, psychosis, seizures—and death. During these inhumane shifts, doctors experience food and water deprivation. Hypoglycemia and dehydration lead to fatigue, confusion, dizziness, and fainting. Physicians are not immune to the basic laws of human physiology.

Bullying and hazing persist in medical education despite being outlawed from elementary schools through universities. I receive ongoing reports of racial and sexual harassment inside our most prestigious teaching hospitals. Most shocking, our nation’s hospitals and medical schools continue to discriminate against physicians and medical students with mental illness and physical disabilities—contrary to their stated mission to provide compassionate care for all.

Medical students and physicians develop high rates of occupationally induced anxiety, depression, PTSD, and suicidal ideation. Yet we’re offered no debriefing or on-the-job support after witnessing trauma and death. Instead we risk interrogation and punishment by medical boards, hospitals, and insurance companies when seeking mental health care. As physicians, we comply with laws protecting our patients’ medical information; however, our confidentiality is often breached by hospitals and medical boards when we receive care. As a result, doctors either don’t receive needed care or drive hundreds of miles out of town, use fake names, and pay cash for psychiatric treatment.

Censorship—loss of freedom of speech—is common during medical training and practice. Physicians and medical students are scrutinized on personal social media accounts and often fear sharing divergent views due to retaliation from superiors.

In the aftermath of medical student and physician suicides, surviving colleagues have been threatened with termination, intimidated to keep quiet, and obstructed from peaceably assembling to grieve the loss of their own friends. Doctors and medical students have also been prohibited from attending funerals for their immediate family members.

Overworked the equivalent of two to three full-time jobs, trainees have no time to build healthy relationships, date, and procreate during their fertile years. If they do conceive, they may face harassment when pregnant, breastfeeding, or requiring time to care for their kids. Medical training places severe physiologic stress on the mother, leading to life-threatening complications of pregnancy and fetal death.

Doctors are routinely exposed to unethical and criminal behavior in clinics and hospitals, including insurance fraud. Some are forced to do procedures without proper supervision or patient consent. Resident physicians are coerced to lie on their time logs if they work more than 80 hours weekly or be punished for duty-hour violations and labeled as “inefficient,” then forced to see psychiatrists where they are diagnosed with ADD and prescribed stimulants to pick up their pace.

United States hospitals and clinics routinely violate the human rights of medical students and physicians, endangering their lives—and the lives of their patients. Physician-induced medical mistakes are the third leading cause of death in the United States. Physicians who attempt to protect their patients by complaining about human rights violations risk retaliation and destruction of their careers.

Please note that for every medical student and doctor suicide, there are thousands of physicians still suffering the non-fatal wounds of their medical education. To physician parents like mine (who warn their children not to pursue medicine) these are the wounds you don’t want inflicted upon your loved ones. To everyone who doesn’t feel quite right after medical training, here are the words that describe your injuries.

So why am I writing a book on human rights violations in medicine? Not to bash my profession. I’m writing this action guide to empower my brothers and sisters in medicine, to save the lives of future generations of physicians—and to salvage my beloved profession.

Please join me in speaking up against abuse.

Add your comment below or scroll down to read 25 comments