What I’ve Learned from 1,710 Doctor Suicides 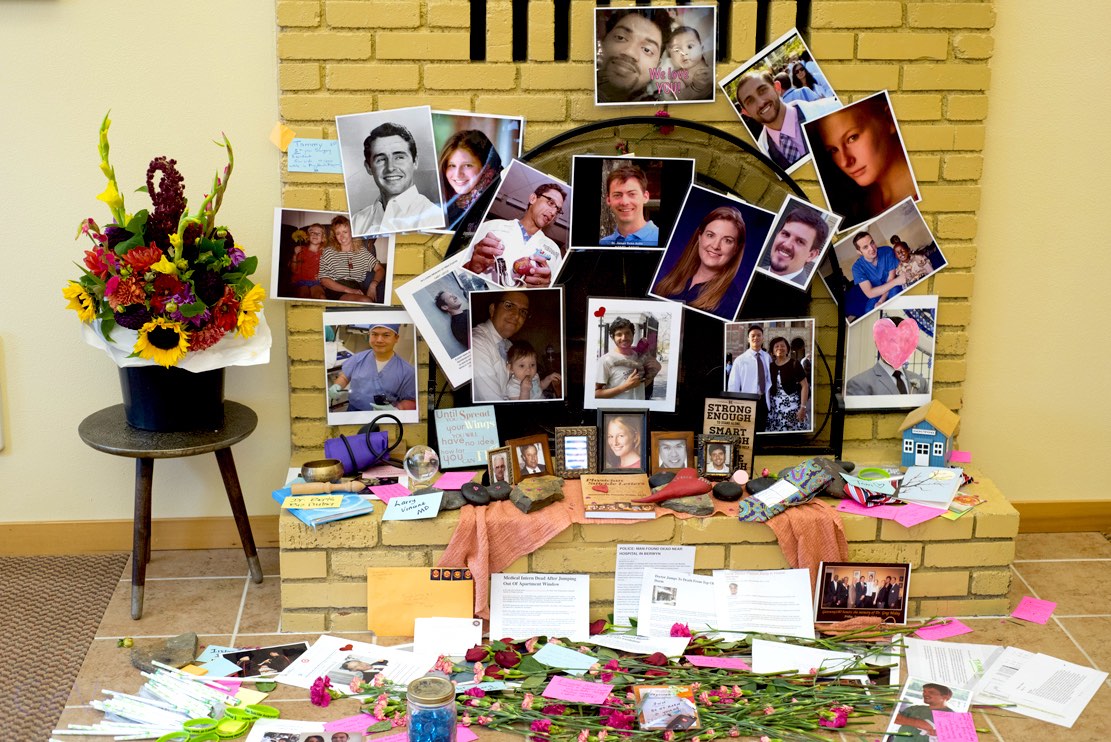 Article featured in The Washington Post and Chicago Tribune.

Five years ago today I was at a memorial. Another suicide. Our third doctor in 18 months.

Everyone kept whispering, “Why?”

I was determined to find out.

[As of 9/17/21 there are 1,710 doctor suicides on the registry. If you’ve lost a doctor or medical student to suicide, please (confidentially) submit names here.]

Immediately, I began writing and speaking about suicide. So many distressed doctors (and med students) wrote and phoned me. Soon I was running a de facto international suicide hotline from my home. To date, I’ve spoken to thousands of suicidal doctors; published a book of their suicide letters (free audiobook); attended more funerals; interviewed surviving physicians, families, and friends. I’ve spent nearly every waking moment over the past five years on a personal quest for the truth of “Why.” Here are 35 things I’ve discovered from the first 547 cases: High doctor suicide rates have been reported since 1858. Yet more than 150 years later the root causes of these suicides remain unaddressed.

Physician suicide is a public health crisis. One million Americans lose their doctors to suicide each year.

Most doctors have lost a colleague to suicide. Some have lost up to eight during their career—with no opportunity to grieve.

We lose way more men than women. For every woman who dies by suicide in medicine, we lose four men. (amended 3/7/19)

Male anesthesiologists are at highest risk. Most die by overdose. Many are found dead in hospital call rooms.

Lots of doctors die in hospitals. Doctors jump from hospital windows or rooftops. They shoot or stab themselves in hospital parking lots. They’re found hanging in hospital chapels. Physicians often choose to die where they’ve been wounded.

“Happy” doctors die by suicide. Many doctors who die by suicide are the happiest most well-adjusted people on the outside. Just back from Disneyland, just bought tickets for a family cruise, just gave a thumbs up to the team after a successful surgery—and hours later they shoot themselves in the head. Doctors are masters of disguise. Even fun-loving happy docs who crack jokes and make patients smile all day may be suffering in silence. We are all at risk.

Doctors’ family members are at high risk of suicide. By the same method. One physician died using the same gun his son used to kill himself. Kaitlyn Elkins, a star third-year medical student, chose suicide by helium inhalation. One year later her mother Rhonda died by the same method. At Rhonda’s funeral, I asked her husband if he thought his wife and daughter would still be alive had Kaitlyn not pursued medicine. He replied, “Yes. Medical school has killed half my family.”

Suicidal doctors are rarely homicidal. Of the first 547 suicides I’ve compiled, only 2% (15) involve homicide. Half (7) are male physicians who killed a female spouse/girlfriend (all in health care—4 nurses, a nursing student, pharmacy tech, and dentist). Three male physicians murdered their young children. Another strangled his disabled adult daughter before killing himself. Less than 1% of all doctor suicides involve homicide of their children. Here’s why surgeon Dr. Chris Dawson shot his kids before turning the gun on himself. Of the 3 cases involving young children, all suicide victims were having marital/relationship problems with the mother. One also killed the mother.

Doctors have personal problems—like everyone else. We get divorced, have custody battles, infidelity, disabled children, deaths in our families. Working 100+ hours per week immersed in our patients’ pain, we’ve got no time to deal with our own pain. (Spending so much time at work actually leads to divorce and completely dysfunctional personal lives).

Patient deaths hurt doctors. A lot. Even when there’s no medical error, doctors may never forgive themselves for losing a patient. Suicide is the ultimate self-punishment.

Malpractice suits kill doctors. Humans make mistakes. Yet when doctors make mistakes, they’re publicly shamed in court on TV, and in newspapers (that live online forever). We continue to suffer the agony of harming someone else—unintentionally—for the rest of our lives.

Doctors who do illegal things kill themselves. Medicare fraud, sex with a patient, DUIs may lead to loss of medical license, prison time, and suicide.

Academic distress kills medical students’ dreams. Failing boards exams and being unmatched into a specialty of choice has led to suicides.

Doctors without residencies may die by suicide. Dr. Robert Chu, unmatched to residency, wrote a letter to medical officials and government leaders calling out the flawed system that undermined his career prior to his suicide.

Assembly-line medicine kills doctors. Brilliant, compassionate people can’t care for complex patients in 10-minute slots. When punished or fired for “inefficiency” or “low productivity” doctors may choose suicide. Pressure from insurance companies and government mandates further crush the souls of these talented people who just want to help their patients. Many doctors cite inhumane working conditions in their suicide notes.

Sleep deprivation is a (deadly) torture technique. Physicians have suffered hallucinations, life-threatening seizures, depression, and suicide solely related to sleep deprivation. Sleep-deprived doctors disclose hospital horrors that kill or injure patients. Others die in fatigue-related car crashes after long shifts. Resident physicians are now “capped” at 28-hour shifts and 80-hour weeks. If they “violate” work hours (by caring for patients) they are forced to lie on their time cards or be written up as “inefficient” and sent to a psychiatrist for stimulant medications. Some doctors kill themselves for fear of harming a patient from extreme sleep deprivation.

Blaming doctors increases suicides. Words like “burnout” and “resilience” are often employed by medical institutions as psychological warfare to blame and shame doctors while deflecting attention from inhumane working conditions. When doctors are punished for occupationally induced mental health conditions (while underlying human rights violations are not addressed), they become even more hopeless and desperate.

Sweet, sensitive souls are at highest risk. Some of the most caring, compassionate, and intelligent doctors choose suicide rather than continuing to work in such callous, uncaring and ruthlessly greedy medical corporations.

Doctors can’t get confidential mental health care. So they drive out of town, pay cash, and use fake names to hide from state medical boards, hospitals, and insurance plans that ask doctors about their mental health care and may then exclude them from state licensure, hospital privileges, and health plan participation. (Even if confidential care were available, physicians have little time to access care when working 80-100+ hours per week).

Medical board investigations increase suicide risk. One doctor hanged himself from a tree outside the Florida medical board office after being denied his license. He was told to “come back in a year and we will reinstate your license.” Meanwhile he lost everything and was living in a halfway house.

Physician Health Programs (PHPs) may increase suicide risk. Forcing doctors with occupationally induced mental health issues into these 12-step programs with witnessed random urine drug screens (when they’ve never had a drug problem!) is humiliating and unethical. So doctors hide their mental health conditions for fear of being punished by PHPs.  [Note: PHPs have helped some doctors with substance abuse especially]

Substance abuse is a late-stage effect of lack of mental health care. Since doctors may lose their license for seeking mental health care or get locked into PHPs; they self-medicate with alcohol, illicit drugs, or self-prescribe psychotropic medications.

Doctors develop on-the-job PTSD. Especially true in emergency medicine. Then one day they “snap” like this guy.

Cultural taboos reinforce secrecy. Suicide is a sin in many religions. Islam and Christian families have asked that I hide the suicides of family members. Indian families often claim a suicide is a homicide or an accident, even when it’s obviously self-inflicted.

Medical schools and hospitals lie (or omit the truth) to cover up suicides—even when media and family report cause of death. Medical student Ari Frosch stood in front of a train, yet his school reported he died at home with his family. Though the family of psychiatrist Christine Petrich shared that she bought a gun and killed herself (after just getting her hair done and planning a surprise trip to Lego Land and Disney for her kids) on their GoFundMe page, her employer wrote she “passed away.” Shouldn’t the department of psychiatry take a more active interest in physician suicide?

Euphemisms cover up doctor suicides. Suicide is omitted from obituaries, funerals, clinics, hospitals, and medical schools. Instead we hear “passed away unexpectedly in her sleep” and “he went to be with the Lord.”

Secrets will not save us. We’re unlikely to make a medical breakthrough on a hidden medical condition.

Doctors choose suicide to end their pain (not because they want to die). Suicide is preventable. We can help doctors who are suffering if we stop with all the secrecy and punishment.

I’ve been shunned for speaking about doctor suicide. After being invited by the AMA to deliver my TEDMED talk, I was disinvited shortly before the event because they were “uncomfortable” with physician suicide.

Ignoring doctor suicides leads to more doctor suicides. Thankfully, an Emmy-winning filmmaker is completing a documentary on physician suicide this year. To honor a doctor or medical student who has died by suicide in the film, submit name here. Contact filmmaker  for a screening at your medical school or hospital.

If you are currently suffering and need help, contact Dr. Wible. Monthly physician retreats ongoing. Have you lost a medical student or doctor in your family to suicide? Request to join our Facebook support group here.

Add your comment below or scroll down to read 200 comments